Tracking Dr Nadine Moeller’s professional path in Egyptology takes one into the rarefied atmosphere of some of the best Ancient History Departments in the world.  Moeller’s career has taken her from the University of Heidelberg, in her native Germany, to the University of Cambridge where she earned her PhD in Egyptology and Archaeology, and where her interest in Tell Edfu began. From Cambridge, Moeller held the Lady Wallis Budge Junior Research fellowship at the University of Oxford where she was also granted the Tell Edfu concession, initiating the most recent phase of excavation at this ancient provincial town (located midway between modern Luxor and Aswan in Upper Egypt).

Currently, Dr Moeller is Assistant Professor of Egyptian Archaeology at the Oriental Institute and a faculty member of the Humanities Department of Near Eastern Languages and Civilisations, University of Chicago. Her post at the Oriental Institute has allowed Moeller to maintain her Edfu connections as Project Director.  Indeed, Tell Edfu is an archaeological mission which has become somewhat synonymous with Moeller’s name, Figure 1: The Town, Tell Edfu,  2011.

Over the past decade of work at the site, Dr. Moeller’s team have uncovered a complex urban area comprising administrative, settlement and storage areas spanning thousands of years, all preserved in a massive mud brick mound (or ‘Tell’), Figure 1a: The Tell. Recently, the team have started to excavate what may prove to be one of the earliest building phases at Edfu.  A two roomed administrative structure is emerging from beneath a large New Kingdom grain-silo area. This large mud-brick building which includes a columned hall, has been dated to the late Middle Kingdom; the hall’s original 16 wooden columns are indicated by the post-holes and impressions which remain clearly visible, Figure 2: Middle Kingdom column post-holes. Ceramics and sealings found in situ date this structure to the Thirteenth Dynasty. The layout of rooms uncovered so far, suggest that the columned hall may have been part of a large, official residence.  With much of the site yet to be fully excavated, stratification levels at Tell Edfu indicate multiple occupation phases dating back several thousand years.

Recently, Dr. Moeller kindly agreed to answer some questions on her work:

You have had an interest in provincial towns and settlements for some time.  Why is provincial culture important to our understanding of ancient Egypt? 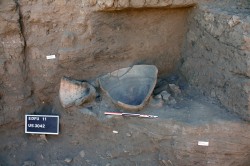 NM: I believe that for a long time our knowledge and research has focused on elite culture and funerary remains creating a strong bias in our perception of ancient Egyptian society especially for the pre-New Kingdom periods. An increasing focus on provincial culture, including the study of settlements, will contribute to a much better grasp of ancient Egyptian society as a whole. It should be possible to find out more, not only about the lower levels of society but also about the relationship and interaction between the provinces and the royal residence.

What sort of a place was the town of Edfu in its heyday and when was Edfu at its peak? 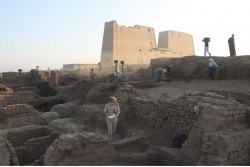 Figure 4 - Town and Temple at Edfu

NM: The ancient town of Edfu has its origins in the Old Kingdom, probably going as far back as the Third Dynasty.  The town was continually occupied until the Coptic period. It is hard to pinpoint a specific moment as its ‘heyday’ because its function as the capital of the Second Upper Egyptian nome meant that it was a major center within this region for most of pharaonic history, Figure 3: Fifth Dynasty bread mould and pot. We know from textual and archaeological evidence that the late Middle Kingdom to the Second Intermediate Period was a specifically important time when the local elite from Edfu were closely connected to the rulers and the elite at Thebes. From the Ptolemaic period onwards, the temple of Horus also played a major role in the importance of the town, Figure 4: Town and Temple.

Did you have any idea of what might lie within Tell Edfu when you first began surveying the area in 2001; have there been any surprises in what you have uncovered?

NM: As excavations usually turn out, there are always many surprises even if one chooses an excavation area for specific reasons and with some expectations. The biggest surprise to us was the discovery of the major administrative building complex consisting of two columned halls which date to the late Middle Kingdom, Figure 5: Different occupation levels at the Tell.

When we started excavating in an area that showed several round silos slightly exposed underneath a thick fill of mud-brick rubble which suggested at least the installation of a storage facility, nobody could have imagined that we would find the earlier administrative complex which might even have functioned as the governor’s palace during the late Middle Kingdom, hidden underneath this level. Further surprises in this area were the large amount of hippo bones that we excavated in several contexts dating to different periods, from the Middle Kingdom to the early New Kingdom, and of course the most unexpected recent discovery are the sealings naming the Hyksos ruler Khayan, Figure 6: Hippo Bones.
How significant was the discovery of Khayan’s cartouche on sealings found during 2010 excavations?

NM: In fact this discovery not only provides the first secure archaeological evidence for a contact of Upper Egypt with the Hyksos south of Gebelein but also opens up many new questions in terms of absolute chronology and of the kind of contact the early Hyksos rulers had with the rest of Egypt. We have discovered about forty sealings naming Khayan and the backtypes show us that they functioned as seals of many different types of commodities including wooden boxes, baskets and bags, which presumably were sent from the Delta to Edfu. Figure 7: Late Middle Kingdom sealing, front & back view. The kind of trade relations which can be inferred from this discovery show us that we have to revise our perception of violent conflict between the Hyksos and the south which seems to reflect mainly the political situation during the late Second Intermediate Period but which might have been relatively peaceful during the early Second Intermediate Period.

What do the large 17th Dynasty grain silos tell us about Edfu in this Intermediate period? 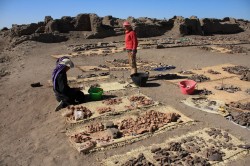 NM: The large silo court of the late Second Intermediate Period was the major grain reserve of the town and indicates the importance and wealth of Edfu during this time Figure 8: Second Intermediate Period Ostraca at Tell Edfu. We don’t know for sure how long grain would have been stored in these silos, and presumably most of it was collected in form of taxes from the hinterland; some of it might have been shipped to the capital while the majority was probably controlled by the local administrators. These are questions that need to be further investigated. The important role of Edfu as a major urban center within the 2nd Upper Egyptian nome is also confirmed by the textual evidence which provides information about a strong elite being present at Edfu and the wider network of provincial capitals in Upper Egypt.

Could you comment on the inscribed ostraca and the fertility figures found at the site? 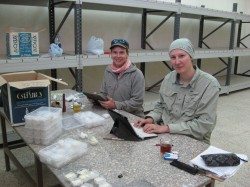 NM: Another unexpected but important discovery were the 150 hieratic ostraca found in connection with the silo court. This is now the largest known corpus of administrative documents of the late Second Intermediate Period/early Eighteenth Dynasty. One of my students, Kathryn Bandy, is currently writing her dissertation on this material, Figure 9: Moeller (L) and Bandy cataloguing the ostraca in the Tell Edfu storage magazine.

The fertility figurines are also interesting finds and clearly belong to the sphere of private religion, a topic that is still poorly understood for pre-New Kingdom times. We can distinguish between two types of figurines, the larger ones are made of fired clay, which resemble those found at Gebel Zeit (Nubia) while the other type is made of dried mud and much more rudimentary in its features, Figure 10:  Figurine from pre-New Kingdom levels.

In a recent excavation report, you note that at least part of the Tell Edfu site appears to have changed function or even to have been temporarily abandoned between the Second Intermediate period and the Late Period.  Have you any theories on why this might be the case? 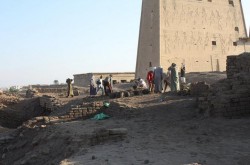 Figure 11 - Proximity of Tell to Ptolemaic Temple of Horus

NM: Well, this is only valid for the specific area we have been excavating so far which lies on the eastern side of the tell, next to the Ptolemaic temple enclosure wall, Figure 11: Town section abutting the temple walls. We don’t know about the rest of the site and the fact that large amounts of waste were deposited on top of the silos during the Eighteenth Dynasty certainly shows that the settlement was not abandoned, but that this official town quarter (comprising of grain silos and the earlier governor’s palace etc.) might have changed its function. There seems to have been some large storage and/or production activity going on in this vicinity which led to the enormous deposit of ash. I think the administrative center of the town moved elsewhere during the New Kingdom. We don’t know yet how the rest of the town developed but I don’t think that it was abandoned.

In the same report, you mention work on 3D modelling of certain features of the site.  What is the ultimate aim of such modelling activities? 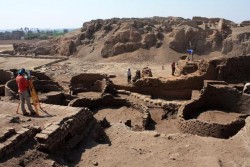 Figure 12 - Total Station in use at Tell Edfu

NM: The ultimate goal is to record archaeological remains more efficiently and more precisely in 3D which would help counter the destructive process of archaeological excavations. The idea is to develop a relatively low-cost method to record wall remains for example, with all the details in 3D instead of having to draw them by hand, with or without the help of the Total Station. This work is in progress and we still have to overcome some technological problems. (NB: A Total Station photographs and maps mark points in a memory bank. This digital information is transferred to a computer, where the data is used to produce a 3D image: information courtesy of the Tell Edfu Project website).  Figure 12: A Total Station in use at Tell Edfu.

Could you tell us something about your forthcoming book ‘The Settlements of Ancient Egypt’?

NM: This book aims to provide a comprehensive and detailed analysis of ancient Egyptian settlements, providing a new definition for the major characteristics of towns and cities in the Nile valley and Delta during the Pharaonic period. By focusing on the entire range of ancient Egyptian settlements it is possible to show important trends and innovations throughout Pharaonic history. I am planning at least two volumes in order to be able to include detailed discussions and analyses of the archaeological data. I will also discuss the much disputed question of what can be considered ‘urban’ in ancient Egypt.

You have spent a large part of your career ‘in the field’ at Edfu.  Do you feel you have developed a link to the people who lived there many centuries ago? 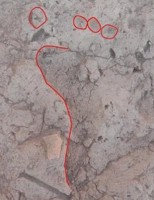 NM: That’s an interesting question which I think about especially when working at Edfu. Last season I worked a lot with the sealings from Edfu, some of which name officials but many show decorative motifs which do not provide much information about the individuals who used the respective sealing. However, by analyzing the backtypes it becomes possible to get a better grasp of what some of these people were doing and how omnipresent they were, for example in the late Middle Kingdom columned hall building. We also find footprints from time to time on the mud floors and can see fingerprints of the people on the sealing fragments, Figure 13: A 2,500 year old footprint (outlined in red) on the mud floor of a courtyard.  This is all fascinating when considering that these people lived several thousand years ago.

For more information about the Tell Edfu Project and the Oriental Institute’s ‘adopt a dig’ program which supports Dr. Moeller’s work, visit the team online at www.telledfuproject.org