N.B. – to see larger versions of the images click on them. 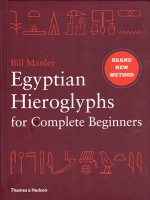 Bill Manley, well known for the surprising best seller How To Read Egyptian Hieroglyphs, co-authored with Mark Collier (generally known simply as “Collier and Manley”), has produced a new book for those who are planning to learn hieroglyphs for the first time.

The Preface, reinforcing the book’s title, makes it clear that Dr Manley is aiming at the complete beginner with this book:  “Your first steps are bound to be a little disorientated and wobbly, but practice makes perfect” (p.7).  He reassures the reader that in this, unlike some other teach-yourself hieroglyph books,  no specialized knowledge of standard grammar and its associated terminology is required.  This will come a relief for some readers who may be daunted by the task of acquiring an understanding of grammatical terms and functions before being able to get to grips with the hieroglyphs themselves.

There are four chapters, or sections, each tackling a different theme:

Figure 2. Demonstrating directions of text on a stela (click to expand the image)

Importantly, Bill Manley writes well.  His prose is simple, clear and easy to digest.  Manley speaks directly to his reader, encouraging and involving them throughout the book.  Each monument or object is illustrated beautifully, so that the hieroglyphs are very easy to see, and most are accompanied by photographs so the readers can see how they look in reality.  All are shown in black and white, but guidelines are superimposed in red to help the reader navigate each piece of text.  The combination of red and black on white, used throughout, is both attractive and effective.

The paper is good quality but (thankfully) not shiny, making it easy to red and jot down notes and practice what you have learned (for which spaces are provided).

The relatively large format of the pages means that the hieroglyphs and the illustrations are given ample space.

Dr Manley begins his ‘Inscriptions’ section with two 6th Dynasty stelae of Meiri, which come from Meiri’s tomb at Denderah.  Although he starts with an early example, the inscriptions in the section are not dealt with chronologically.  Rather, the inscriptions are chosen to suit the way in which the course develops.

Over the 32 pages dedicated to the two stelae, Manley introduces important elements of Ancient Egyptian, all introduced under headings which allow you to flip back and find those lessons easily as you work through the book.  Starting with sound signs, he explains how hieroglyphs can represent single sounds, dividing them into three categories:  those that are like our own alphabet (the owl hieroglyph doesn’t represent the word for an owl, but the sound value m); those that represent sounds that are familiar to us but for which we don’t have single alphabetic signs (like sh); and those that represent sounds which in English we don’t express often if at all (like the sound for ch as it is said in the word loch).

From here, he moves on to how to work out the direction in which the writing flows, looks at how Egyptologists cope with the lack of vowels, discusses how hieroglyphs are pronounced by modern scholars and goes on to look at the other nitty-gritty essentials of hieroglyphs.  The second stela of Meiri is used to introduce ideograms, to delve more deeply into the importance of phrases, and to tackle the idea that there are exceptions to Ancient Egyptian grammatical rules. 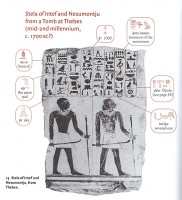 Figure 3. Stela of Intef and Nesumontju, broken down into components

The rest of ‘Inscriptions’ builds in the same way, using excellent photographs and illustrations to demonstrate how the Ancient Egyptian language is put together, how to read and interpret it and what it actually indicates.  The object types span the Old Kingdom to the New Kingdom and include stelae and two coffins, all belonging to high officials.

Within his pages discussing the first stela of Meiri, Manley covers the essentials of Ancient Egyptian hieroglyphs, effectively launching the reader into a new world of translation, and preparing them for the objects to come.

Throughout, Manley holds the reader’s hand, always encouraging revision and testing of what has already been learned:  “At this point, you may like to go back to the stela and make sure that you are clear about what you recognize.  In #6 we will move onto the hieroglyphs you do not recognize yet: What are they doing?” (p.19).  Throughout this and the other sections he provides points at which to recap and times at which to practice key features of what has been learned.  Visiting and revisiting this type of information is invaluable, an essential part of making the hieroglyphs stick.

This section looks specifically at the way in which Egypt’s pharaohs had their names, titles and epithets represented on objects and monuments.  As any tour to Egypt will include looking at dozens of these, it really helps to be able to feel involved with what you’re looking at if you can translate some of the basic information about who built a monument or created a scene.

Manley begins, helpfully, with the oldest kings’ names, which helps the reader to understand how the writing of kings’ names and titles evolved over time.  Various examples are given, from Old Kingdom to New Kingdom, but many readers will be pleased to find inscriptions from one of the golden shrines of Tutankhamun included.

The Oldest and Earliest Hieroglyphs

Unusually in a self-help hieroglyph book, Manley takes the reader back in time in his third section to look at how writing began.  This is not merely a history lesson;  Manley builds on the knowledge that he has imported so far to tackle the palette of Narmer, the ivory comb of King Djet and the ivory label of King Den.  This really does give the reader the sense that they are able to get into the spirit of Egypt’s earliest kings, and to see how the language developed from these early beginnings,

Putting It All Together – Two Inscriptions 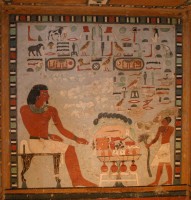 In his last section Manley looks at two inscriptions: a marriage inscription of Amenhotep III on the base of a scarab and the Middle Kingdom offering chapel of Sarenput II at Aswan.  Again, Manley is very much on the side of the reader.  In the 9-lined marriage inscription, instead of starting at the beginning of the texts, he takes the reader to the most easily identifiable elements – cartouches, titles and epithets, commenting “What matters is that you have found in the middle of this inscription a natural place around which to orientate your reading” p.124.  From there, he works with the reader to build up the full translation, step by step.

A similar process is applied to the inscription of Sarenput II (the only photograph that suffers from being shown in black and white – a shame that it wasn’t shown in its full colourful glory on the cover of the book).  By the time you get to the end of the Sarenput translation you should feel as though you have really achieved something, and that you have arrived at a very useful place.

The remainder of the book

In his short ‘Epilogue’, Manley brings together some of the key points about Ancient Egypt that a reader will have observed whilst translating the texts – the role of the burial chapel and tomb, the importance of the offering cult and the nature of the dead.  He recommends as a next step, Collier and Manley’s How to Read Egyptian Hieroglyphs (British Museum Press), the more comprehensive and challenging Middle Egyptian by James P. Allen (Cambridge University Press) and Raymond Faulkner’s A Concise Dictionary of Middle Egyptian (Griffiths Institute).

This is followed by a list of Kings’ names (only nomens and prenomens after the Third Dynasty), which is a very useful resource for quickly checking a name on an inscription (and useful to photocopy and take with you to a museum or on a trip to Egypt).  Next is a list of deities, preceded with a brief introduction to Ancient Egyptian gods.    A list of common hieroglyph signs is a useful reference to be used in conjunction in the book, but Dr Manley makes it clear that there is no correspondence to Gardiner’s sign list, although it is organized on similar principles.  Wrapping up the book is miniature dictionary of words, organized according to the standard Egyptian alphabet.

How this compares to Collier and Manley

Those familiar with Collier and Manley’s How to Read Egyptian Hieroglyphs (British Museum Press) may be wondering how that book differs from the new one.  The main distinctions are:

This is a book for beginners, designed to be more basic than the earlier How To Read Hieroglyphs co-authored with Mark Collier.  It would also make a good revision text for those who have already done a bit of basic hieroglyph learning but have let it slip (and hieroglyphs are famous for their slippery properties).

This is certainly an excellent place to start, providing a thoughtful and easily tackled route through an often daunting set of tasks.  There are no sudden leaps or unexpected surprises, the progress is smooth, and the overall experience is enjoyable.

My previous recommendation to complete beginners was Janice Kamrin’s  Ancient Egyptian Hieroglyphs, A Practical Guide (American University in Cairo Press) but for me, the new Manley book flows more smoothly and offers a more manageable approach to vocabulary.  Together, the two books would make a very good starter pack.

This is by far the best of the beginner’s guides that I have encountered, leaving the reader in a position to handle many common inscriptions and, should they wish to, to take their studies further.