Egyptological is one year old and we celebrate with a bumper edition with eighteen original articles, reviews and albums for your delectation. 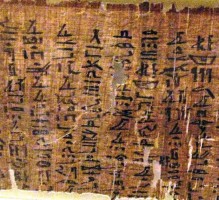 It is hard to know where to start!  Perhaps with Edition 5 of the Journal.  Although three articles have been deferred to the next edition of the Journal we still have four articles and one review.  Etienne Vande Walle has added to his corpus on the Ancient Egyptian legal system.  This time he presents notes on the legal vocabulary of the Old Kingdom and the First Intermediate Period.  The article should perhaps be the starting point for anybody wishing to study the legal system of Ancient Egypt.  Together with his study of sAb, it is scholarship of the highest order. Our thanks once again for the excellent translation by Diana Gainer.

If Etienne’s material is adding to an area of study familiar to readers of Egyptological, Dave Smith’s work takes our material in a new direction with his work on eclipses.  This is the first of a two part series and sets the scene.  The second part which will be in the next edition, attempts to correlate eclipses with inscriptions identified by Dave and will interest anybody with an interest in dating the chronology of the New Kingdom.  It is a series not to miss.

The other two Journal articles could not be more different to each other.  Barbara O’Neill presents an essay on the papyri of Heqanakht, a 12th Dynasty farmer/landowner.  Janet Robin’s article Vernacular Voices: Pophis, A Romano-Egyptian published in In Brief alongside the previous edition, has showed there is enormous interest in non-royal individuals – I hesitate to say ordinary, because they are anything but – and I am certain that Barbara’s article will likewise be popular.  In the other article, Gallina Mackenzie presents our first piece of experimental archaeology, looking at the manufacture of faience.  I cry every time I read the fate of the poor model hippo.

Gaston Peltier is the final contributor to the Journal with a review of the Klemms’ Stones and Quarries in Ancient Egypt.  Gaston writes with panache, somehow managing to include the phrase “the petrology of cooking”.  Even if you have little interest in quarries it is a great read and Gaston makes some interesting observations. 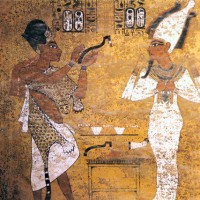 Opening of the Mouth Ceremony

Brian Alm has written the concluding part to his series on religion in Ancient Egypt. In Roots too Deep to Dislodge he not only brings together his previous pieces, he shows how the fabric of religion was a constant throughout the period we recognise as Ancient Egypt.  Many authors assume the Nile was the well-spring of Egyptian unity, but spare a thought that religion unified the culture not just in geographical terms but over time as well.

Andrea and I are immensely grateful to Brian and hope he continues to contribute to Egyptological.

It is always particularly nice to receive full-blown articles on topics only covered before in book or conference reviews. Back in September 2011 Andrea presented a review of Dr Kate Spencer’s AWT lecture on House and Home at el-Amarna.  It is wonderful that Jac Strijbos, a new author whom we welcome to Egyptological, has developed these themes in an article called Pleasant Living in Amarna.  I confess to ennui when reading some articles on domestic arrangements but Jac’s article is absolutely riveting and gives a real insight into ordinary life. 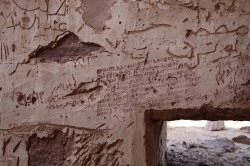 Like the Journal, new topics and authors are balanced by the return of familiar friends and we know people have been waiting for the second part of Gary Beuk’s article on Arthur Mace.  Those who are unfamiliar with Mace’s life may be surprised at the extent of his involvement in the tomb of Tutankhamun. Howard Middleton-Jones also continues his occasional contributions on Coptic heritage, this time with a timely piece on the threats to sites from looting and general degradation of frescoes when exposed to the air and sunlight.

Perhaps the most common question directed at field Egyptologists is “What’s it like to be on a dig?”  That is the question answered by Barbara O’Neill fresh back from an excavation in Egypt. Barbara has delicately balanced the SCA restrictions on reporting. I am sure many people will be fascinated.  Barbara has also secured an interview with Dr Carolyn Graves-Brown at the Egypt Centre at the University of Swansea.    We are especially indebted to the Egypt Centre because we also recently carried a truly lovely piece written by Wendy Goodridge, Assistant Curator of the Egypt Centre, Maths made fun! Pharaoh’s Formulae: a fun approach to Egyptian Mathematics which explains how the Egypt Centre supports the school visits which are mentioned by Dr Graves-Brown in her interview.  If you are a small (or not so small!) museum with an Egyptian collection and would like exposure, then please get in touch with us.

As always, Andrea has been a stalwart and in addition to editing the majority of articles has contributed several of her own.  There are two book reviews.  Her review of Grand Hotels of Egypt in the Golden Age of Travel by Andrew Humphreys shows that subjects ancillary to the study of Egyptology itself can be fascinating.  Andrea let slip in emails that this is a book she intends for her permanent personal collection – perhaps the greatest accolade from any reviewer.  Although when I read her other review, Life Everlasting: National Museums of Scotland Collection of Ancient Egyptian Coffins by Bill Manley and Aidan Dodson I ordered myself a copy from Amazon.  Maybe that is a higher accolade?  Regardless, I am sure that every reader will find one or both of these books interesting.

Andrea has also reviewed the Gurob Harem Palace Project Conference and written up her visit to the Egyptian collection of the Lady Lever Art Gallery in Port Sunlight (UK). Andrea and I would love to see write ups of more of the minor museum collections so if there is a small museum near you, we would love a write up and a set of photos (if photography is permitted).

If anybody is looking for subjects about which to write for Egyptological, they could do worse than investigate sites which get scant mention in the most common books.  All too often there is a very interesting, but little-known, tale awaiting a writer’s attention.  So it was with the pyramids at Zawiyet el-Aryan, my own modest contribution to this edition.

Colloquy: In Brief and Photo Albums

Between the editions, we continue to publish shorted articles in In Brief and photo albums.  The most recent three articles are:

Synchronous with this edition, we are pleased to publish  short article by Barbara O’Neill about The Mortuary Temple of Nebpehtyre Ahmose at Abydos. Surprisingly we have published very little written material about Abydos before and its good to remedy this. 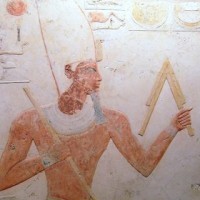 Our most recent photo albums are:

And with this edition we are publishing another – The Mortuary Temple of Merenpthah by Yvonne Buskens.

We also welcome Barbara O’Neill to the editorial team as Features Editor with particular responsibility for In Brief.  Over the coming days  – or at least once I am back from holiday – we will be re-organising the About section of the website to make provision for sub-editors like Barbara and to provide more recognition for our many volunteers.  There is an opportunity for others to become involved if they wish.  We urgently need people who could maintain an events calendar and somebody who knows Photoshop well enough to prepare images for publication in articles or albums. As Egyptological grows, the support team needs to grow too.

Andrea and I remain as editors-in-chief.

Thank you once again to the many people who have helped to make this edition possible.  In addition to the authors, we should like to thank: Diana Gainer, Kate Gingell, Cheryll Agg, Florence Shearer and Anna Hodgkinson.

Articles in previous editions have been linked for your convenience.

For image credits please refer to the articles in this edition.