On becoming a curator:

I am curator of the Egypt Centre. As a secondary modern school pupil who had failed the 11 plus (a grammar school entrance examination)  in the 1970s there was little chance of me studying for a degree in Egyptology. Not only did fewer people go to University then, but Egyptology degrees required a reading knowledge of German. The school I went to didn’t teach German. However, I was lucky enough to get a place at Durham to study archaeology, which I thoroughly enjoyed. In the first year we were allowed to take a subsidiary course which would not count toward our final marks. I took Egyptology.  On leaving University I spent a few months on excavations in Britain and then got a job as assistant curator at Newark Museum in the Midlands, a general local history museum.  While working there I did an AMA (Associate of the Museum Association Diploma) in Museum Studies. Then, after almost 15 years working in various local history museums, I saw an advert for the post of curator at Swansea University. A new museum was being set up (we officially opened in 1998) with the help of heritage lottery funding and European Regional Development Funding. The collection had been in Swansea since 1971 under the care of Kate Bosse-Griffiths, but this new museum would be purpose built with a full-time curator. It wasn’t until after I took up my post at Swansea that I did my PhD in Egyptology (part-time at UCL). The strange thing was, my supervisor for my PhD was John Tait, who had taught the subsidiary Egyptology classes at Durham so many years before!

On the display and conservation of objects: 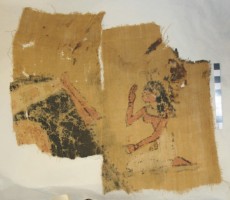 EC185, a fragment of a Soter type shroud

The Egypt Centre at Swansea is quite unusual in the museum world in that we have a large percentage (almost a quarter) of our artefacts on display. By comparison, larger museums may only have between 2 and 4% of their collection on display. This is partly because we want to show as much as possible and partly because our display area can be environmentally controlled while the stores cannot. The funding for the new museum in the 1990s was for the display area and not for storage and hence the storage is not as good as we might like. The display area is thus partly ‘open storage’.  I decide how the collection is displayed and what is displayed. Of course I do have bosses (curators are often low down in institutional hierarchies), but I am lucky in that I am allowed a lot of freedom. This wouldn’t necessarily be the case in a large museum where committees might decide what goes on display. There are advantages to working in a small institution. We have our best examples of different classes of objects on display and to move others in and out of storage would neither benefit our objects nor our visitors.

All objects in store can however, be made accessible to anyone who wishes to see them, not just research students but anyone who is interested (the exception being that we would not allow access to irresponsible people). We do not distinguish between ‘serious researchers’ and others since it is our aim to allow as many people as possible to access the collection. So, for example, we allowed access to a lady who wanted to free the souls of mummified remains. In my view it is not the place of a curator to censor access to the collection. Of course, anyone wishing to see the collection needs to make an appointment and because we do not have a dedicated research area this means that in practice access is only allowed when we are closed to the public. Perhaps one day we will have research area adjacent to our stores which will make life easier. The stored collection is not hidden; all the objects can be found on our searchable database (http://www.egyptcentre.org.uk/).

Remedial conservation (making good damage already evident on an artefact) is a specialist subject and should not be undertaken by untrained curators. Larger museums have their own conservation staff while smaller museums, like the Egypt Centre, employ outside conservators for particular tasks. However, all curators should carry out preventative conservation (making sure things decay as little as possible).  Of course conservation and making things accessible to the public are usually polar opposites. Even putting things on display behind glass causes them to decay, even if only slightly. Therefore, taking heed of conservation and accessibility is necessarily a balancing act.

There is always some tension in serving the needs of the public and academic communities. So, for example, we cannot allow students to give presentations on the collection without providing training; we need to think about the quality of the service we provide. Our general displays are designed for non-Egyptologists while the booklets beside each case give more detailed information which might be required by Egyptologists. Generally, however, we feel that helping one does not exclude the other. And indeed the two groups are not polar opposites. 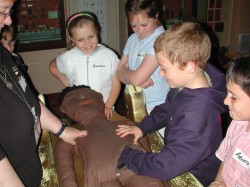 Children at the Egypt Centre

We see ourselves as a bridge between the academic and non-academic arms of the university. So, we support research and teaching by being directly involved in both and by making our facilities available to others involved in such roles. Indeed, the Centre was involved in the early days of formulating Egyptology as an undergraduate degree at Swansea. At the same time our aim is to make Egyptology as accessible as possible to all groups and to this end we have an innovative schools educational programme and a volunteer programme. The educational programme is innovative in its emphasis on low-tech, hands-on activities which are focused on key skills and which engage small groups of children. Our volunteers mirror our twin academic and public roles in that volunteers are a mixture of all ages (we have adult and child volunteers), socio-economic groups and abilities so they include both students and the wider public.

Most school days we have school groups visiting. We pride ourselves on our interdisciplinary approach, i.e. we use Egyptology to teach mathematics, literacy, and other skills rather than simply Egyptology. We make use of low tech interactive displays. Our dummy mummy (basically a rag doll which can have its organs, including brain removed, and which can then be bandaged etc.) is extremely popular. Schools come to us for a day and our volunteers work with them in small groups. We see our volunteers as both representing the wider general public as well as unpaid staff serving the community. Thus, our volunteers are a vital link with the community. Some of them are from the local student population others are long term unemployed.  Some have mental health problems or disabilities, and include people interested in teaching in museums or in Egyptology. Our volunteers are given training in Museology as well as Egyptology and they can interpret objects for the public either by acting as guides and educational leaders or by writing labels.

On Saturdays we have workshops for disadvantaged children. These may be socially or economically disadvantaged. Many cannot read or write. Through fun activities we concentrate on reading and numeracy but more importantly confidence building. We have anecdotal evidence that in some case children’s lives have been changed by this experience. We also make extensive use of the Egypt Centre’s website (www.egypt.swansea.ac.uk) in order to reach a wider audience. Egypt Centre staff give talks to many different groups, not only at Egyptological conferences but with local church groups, rotary clubs, in fact with most people who ask us!

On teaching and research interests: 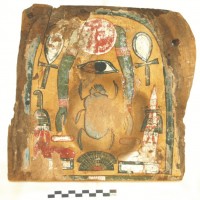 W648, a fragment of a Third Intermediate Period coffin

Egypt Centre staff, unlike some other university museum workers, come under the umbrella of ‘support staff’, that is we support the academic role of the university. So we support teaching. However, we are directly involved in both undergraduate and post graduate teaching. We have recently introduced an MA module which involves both Museology and Egyptology. Basically, students are required to present a handling session to members of the public. They are assessed on museological issues (preventative conservation, targeting particular audiences, etc.) as well as Egyptological ones.

I am particularly interested in two areas – Egyptian Dynastic lithics and also in gender studies. As far as Dynastic lithics goes, I am particularly interested in New Kingdom technologies and would like to follow up on my preliminary studies of lithic technologies at Amarna (time is always a problem). As far as gender studies are concerned, when writing my book ‘Dancing for Hathor’ I only touched on a whole host of exciting areas. Research on some of these areas is ongoing including the role of the king’s daughters in Amarna.

I see Facebook as a marketing tool, to advertise what the Centre is and what it does. At the same time it can provide useful feedback on what people like, dislike and occasionally present new information on our objects.

At the Egypt Centre we have lots of grand plans, but how many of them will happen we don’t know. We desperately need new stores and a research area. We would like an educational room for university teaching and for school groups. We would like to be involved more in interdisciplinary teaching in the university and of course in object centred learning. We feel passionately that students should have the opportunity of being taught through objects rather than simply book learning. Objects have a sense of concreteness which makes the past seem more real. At the same time, artefacts possess a sense of mystery and otherness which excites the imagination.

All images are copyright of the Egypt Centre, Swansea. Used with permission